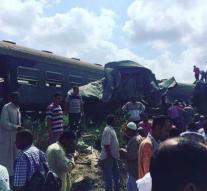 cairo - An Egyptian public prosecutor held two drivers on Sunday and two of their assistants who operated the trains during the heavy accident Friday at the city of Alexandria.

According to the latest figures of the press agency MENA 41 killed and 133 injured. The four train drivers are currently in custody for fifteen days.

On video images of after the crash, it can be seen that some of the trains of the trains have been pushed together, others have dropped out of the track. There is still no certainty about the crash near the Khorshid station. A rescuer mentioned a wrong change as a probable cause. Egyptian President Abdel Fattah al-Sisi has ordered a large-scale investigation into the accident.

There is a lot of complain about safety on the track in Egypt. The country is therefore regularly upset by serious railway accidents. In 2002, 360 passengers died due to fire extinguishing in their train.