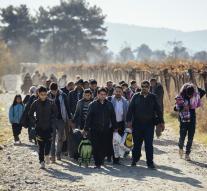 skopje - After Hungary, Slovenia and Macedonia is also planning to build a fence to stop the many refugees from Boom Land. The military is Monday began the terrain along the border with Greece to prepare them, reported the television station TV Telma.

The Macedonian Security Council spoke last weekend on such a measure and the armed forces Sunday instructed to begin preparations for the fence. President Djordje Ivanov, however, stressed in a statement that it is not yet certain that the fence is actually built. Such conduct would " last resort " when the countries where the refugees want to go, they do not want to record.