Home / Tech / Mac development on the back burner 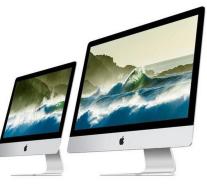 - Apple fans of the first hour it's already noticed lately are not very many new Mac computers. Now it is clear why: the development of the popular laptops and home computers from Apple namely hit on the back burner, according to a report from Bloomberg.

Based on anonymous sources within the company the financial news agency outlines a situation where the future of the Mac not look too rosy. For example, there would be no separate team be more on the development of MacOS, the operating system for the computers. Instead, it is merged with the IOS-team, the latter has a higher priority.

In addition, technical setbacks would have ensured that some models came out later than planned. So the big 12 inch MacBook introduced in 2015 should actually have are already in stores in 2014. In addition, the recently released MacBook Pro, the intention was that would have a new battery that lasts longer. However, it failed to finish it on time.

Mac fans do not expect major changes in the coming year. Apple would this year focus on internal improvements, such as faster processors and adding USB-C ports iMac.