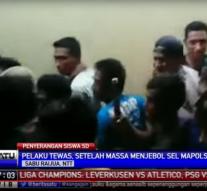 jakarta - An angry mob Tuesday in the Indonesian region Sabu Barat slain a man who had been stabbed with a knife by seven children. Children sit at a primary school. They were taken to hospital with various injuries. None of them finds in danger.

The police arrested the offender and locked him in the local police station. But the crowds he managed to get out of the office and killed him on the street. According to police involved a twenty, probably mentally disturbed young man.