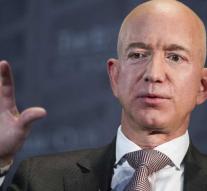 seattle - The aerospace company of Jeff Bezos, Blue Origin, has started the development of a large lunar lander, which is suitable for reuse.

Amazon founder Bezos, with assets of more than 100 billion the richest man in the world, has conceived the plan to exploit the moon. If it is up to him, there will be a permanent base and heavy industry that is less desirable on earth.

Building a lunar lander, who can fly back and forth with a lot of cargo on board, is an important step. Bezos hopes to be able to use the spacecraft for tests in two years' time. If everything goes according to plan, colonization of the moon can begin in 2023. Bezos already sees that millions of people live and work in the future.

Blue Origin is also working on the New Shepard, a rocket for tourist space travel, and the New Glenn, which brings heavy satellites into space on a contract basis. The launchers must return safely to earth for a subsequent launch. Bezos has competition from other wealthy businessmen in the conquest of the moon and space, including Elon Musk (Space X) and Richard Branson (Virgin Galactic).