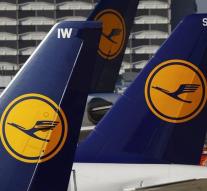 frankfurt - The pilots may strike the German airline Lufthansa. Lufthansa had Tuesday asked two courts to ban the strike, but who gave permission for the strike. The pilots union Vereinigung Cockpit (VC) has also extended the strike for Wednesday and Thursday.

The two-day strike will cause a huge mess. There are already 876 flights canceled, that's about half of all flights, and it is expected that approximately 100 000 passengers inconvenienced by the strike.

The conflict between Lufthansa and the pilots union drags on for more than two years. Since 2014 there have been thirteen strikes, the last in September 2015. But the parties only disagree. Apart from the salary, there include disagreements over pensions and the growth plans that the airline cost carrier Eurowings.