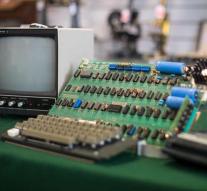 cologne - The German hardware collector Achim Baqué paid a little over one ton for one of the first computers that Steve Jobs and Steve Wozniak marketed in the 1970s at an auction in Cologne. Of the Apple 1, which consisted of only 200 components and at the time cost $ 666.66, so far known worldwide, there are still eight operating copies. This date from the year 1976.

'A bargain, very surprising,' exclaimed the 48-year-old buyer from Euskirchen in the Kölner Stadt-Anzeiger. He told him to have a similar device from the beginning of the PC era and did not really count on an affordable second. Last year, an Apple 1 made out of the same series, of which only a few hundred were made, for half a million euros to an Arab Sheikh.

The old computer was hammered at 90 mille on Saturday. Including auction fees and VAT, the new owner of the historical motherboard, display, keyboard, cassette recorder and power supply charged 110. 000 euros. A housing was missing yet.