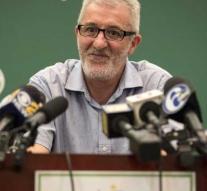 'Fathers always know better', the African immigrant laughed Friday at the handing over of the check.

The father of two children arrived in the USA in 1996.

Souami was still in the shop to give something back, when he decided to buy a lot again. The next day at the supermarket, his mouth opened when he heard that the numbers 3, 6, 9, 17, 56 and the powerball 25 made him multi-millionaire.

His hands were shaking so that it took two hours to fill in the form, writes the New York Post.

Souami has been playing in lotteries for 21 years. His 20-year-old son was always against 'because he would never win'.