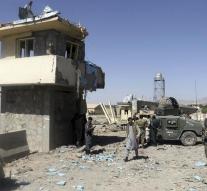 gardez - Five suicide terrorists attacked the police headquarters in Gardez, east of Afghanistan on Sunday. In addition, ten deaths have fallen and 30 were injured. The attack took place around 6.30 am local time.

A terrorist blew by car and already at the entrance of the desk, four others then stormed into the complex. These assailants were killed by the police.

The Taliban claimed the attack and claimed that hundreds of agents died, but the Taliban generally overwhelms these types of numbers.