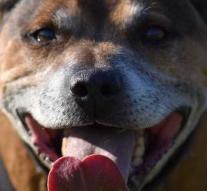 hanover - It is not yet certain whether Chico, the Staffordshire terrier who kills his owner and his mother in Hannover last week, will take it alive.

The dog is closely monitored by dog ​​behavior experts to determine whether Chico is a permanent threat to humans and animals. Bild Zeitung reports that. If that is not the case, the dog may spend his days in a special facility. Another option is to put the animal to sleep.

In the aftermath of the deadly bite incident, it became clear that Chico had already been described as dangerous in 2011. His owner Liridon K. was not considered competent enough to hold such a dog by a local authority.