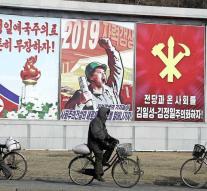 pyongyang - A man who disappeared more than 40 years ago from his home in Japan is now found in North Korea. This is reported by the Japanese news agency Kyodo.

Minoru Tanaka disappeared in June 1978 without a trace at the airport in Narita, Japan. He would leave for Europe that day in his twenties, but never stepped on his planned flight. Nobody ever heard of him again, writes Nieuwsblad. Until now.