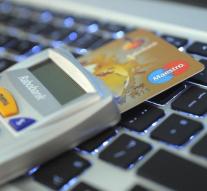 amsterdam - The damage caused by fraud in online banking and pins last year despite the strong growth of electronic payment methods remained virtually unchanged from 2014. Excluding a major incident in 2015, the loss six percent have failed. That made Payments Association Netherlands on Monday in its annual report.

The total noose came last year at 17.9 million euros compared to the historically low level of 17.3 million in 2014. The so-called pass-opstuurfraude where criminals pose as bank employees and citizens asking to send their only resulted a loss of 1.7 million euros.

Last year there were in the Netherlands, approximately 1.5 billion transactions via internet banking with a total value of approximately 4900 billion. The loss of this payment was 3.7 million euro, or 0.0001 percent of the transaction revenues.