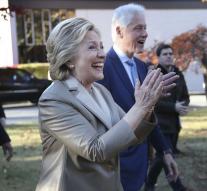 - The Los Angeles Times (LAT) mapped Tuesday once more how the presidential elections could proceed. On that card Hillary Clinton wins big. There is already voted in eastern states and count at the end of the ballot Clinton, according to the LAT on 352 members of the electoral college that chooses the president formally. Trump 186. The college has 538 members and 270 electoral votes is enough to become the 45th president of the United States.

The LAT does not gamble, but to rely on carefully polls, the history of elections in each state and the work of the reporters on the spot. In the previous 'election card' of this newspaper were five states whose preference was still very unclear and the LAT now assigns to candidates. According to the LAT go Arizona, North Carolina and Ohio to Clinton and Iowa and Utah to Trump.