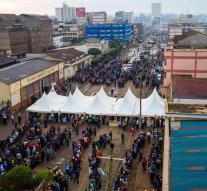 nairobi - Three hours before the polling stations opened in Kenya, people were already waiting in long queues to cast their vote. The election on Tuesday runs for President Uhuru Kenyatta and his main opponent Raila Odinga. According to the BBC it becomes a neck-to-neck race. Eight presidential candidates participate in total.

Kenyatta called all 19 million voters to vote and to do 'in peace'. 'If you've cast your voice, please go home,' he said Monday. To become president, half of the votes plus one vote is required. If none of the candidates succeeds, follow a second round.

Counting the votes in Kenya proved a problem in recent elections. In 2013, the electronic voting machines broke down while the winner was announced in 2007 while the countdown was still under way.

Kenyatta's political opponents accuse his government of bad management and corruption. Also, the president had been charged with the alleged role of the massive violence after the controversial presidential elections in the end of 2007 by the International Criminal Court in The Hague. More than a thousand Kenians were killed.

There was a conflict of election fraud and the question of who won the poll. Kenyatta would have forced people to commit violence against payment. Hundreds of thousands of inhabitants of the East African country were driven away from home and fire in politically motivated tribal struggle. The prosecutors of the court failed to get the evidence against Kenyatta.

The 72-year-old Odinga participates in the presidential election for the third time. In 2013, he lost his 55-year-old rival.