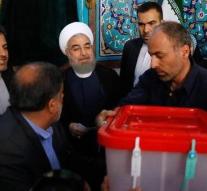 teheran - Some 56 million Iranians have been called on to elect a new president on Friday. State television stations showed images of long queues of voters waiting for polling stations in the capital of Tehran and other cities.

The fight is mainly between current president Hassan Rohani (68) and an 'ultra' among the mighty clergy, Ebrahim Raisi (56). The choice is not democratic because the ruling clergy has forbidden most candidates to participate in advance.

Rohani is a reformer who dragged his country from international isolation. Raisi is a former prosecutor and acts as a confidant of spiritual leader Ayatollah Ali Khamenei (78).