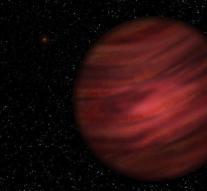 london - A million times a million kilometers. So far appears to be a planet in another system of its star, 7,000 times the distance from the Earth to the sun. A group of scientists that has discovered.

It is the largest distance between a star and its planet ever found. The planet takes about 900 000 years to run a lap around its star. The earth does there 365 days and 6 hours. The Star light comes after forty days on the planet, while the light from the sun eight minutes after coming on the earth.

The planet was already seen. But he turns around a star, was unknown. The distance was so great that scientists thought until now that he was a so-called orphan planet. That's a lonely planet, no star and no other planets, wandering through the universe. They are thrown out or never been bound.

The planet, discovered in 2014, has the scientific name 2MASS J2126. The astronomers conclude that it belongs to a star in the neighborhood, which is called TYC 9486-927-1. The planet is not as lonely as we thought, but it is a long distance relationship , says researcher Niall Deacon.

Scientists do not yet know how the system was created. The star and its planet are between 10 and 45 million years old. For space concepts is very young. The planet is eleven to fifteen times the mass of Jupiter, the largest planet in our solar system. The scientists describe the celestial body in the leading British scientific journal Monthly Notices of the Royal Astronomical Society.