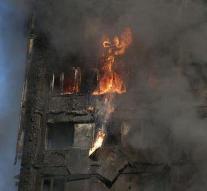 london - The residents of a tower flat in the London district of Camden have to leave their house because of fire safety. That reported British media on Friday. The property has the same flammable coating as the Grenfell Tower residential building in Kensington where a large fire broke out on June 14, leaving at least 79 people. The municipality leaves the lining removed.

It is about the evacuation of 161 apartments of one of the flats of a complex of five flats. The people have to leave their house because of 'urgent work because of fire safety. 'Later the other four apartment buildings will be addressed.

Friday it was known that the fire in Grenfell Tower was caused in a cold freeze combination. The fire could then spread rapidly because the property was lined with flammable plating.