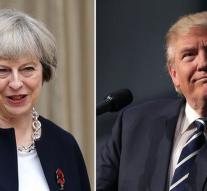 london - The British police have started to share information with the United States, including the attack in Manchester. That happened after the Americans gave new assurances that the information was not cleared.

The British police stopped sharing information after the New York Times officially released unpublished forensic photos of the used bomb. Previously, the name of the suspected perpetrator, Salman Abedi, was leaked in the US before being published in England.

'We appreciate the important relationships with our trusted intelligence, enforcement and security partners in the world,' said the British Police's National Terrorism Service Office on Wednesday night. 'When that trust is violated, it undermines these relationships and undermines our investigations. '

The British government was furious. British Prime Minister Theresa May spoke to US President Donald Trump on Thursday at the NATO summit in Brussels.