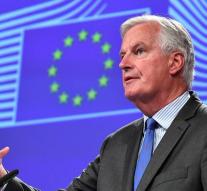 brussels - It is the responsibility of the British government to keep the border between Ireland and the British Northern Ireland 'soft'. This means that citizens from both sides after leaving the United Kingdom from the European Union must be able to live freely, to live, act and work as they do now.

That said EU chief negotiator Michel Barnier for the brexit in Brussels. He is concerned about the border issue. 'It's a unique situation that deserves a unique solution. 'The border, where about 30,000 people pass every day, is the only British border with another EU Member State. In addition, the situation is historically politically sensitive, by the division of the Republic almost a hundred years ago.

The European Commission has made new documents public with requirements of the 27 EU countries. For example, EU companies that are to be launched through public procurement in Britain can continue to do the same under the same conditions after brexit. Barnier also wants the guarantee that confidential EU documents stay and otherwise be destroyed.