Home / World / London has the most wealthy 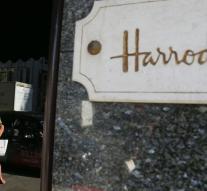 johannesburg - London is the city with the largest private wealth within its borders. The British capital has no less than 357,000 millionaires and 62 billionaires. Together, this group of rich is good for converted 24.7 trillion of private property.

The market researcher New World Wealth in Johannesburg Wednesday published its annual list of cities with the most private wealth. Dutch cities are not in the top.

New York is on the second position. In the American metropolis life 336. 000 millionaires and 65 billionaires who can bring to the table all together 23.7 trillion. Tokyo is good third, with 272. 000 fourteen millionaires and billionaires. The realms of Tokyo account for 20.1 trillion. San Francisco is fourth, followed by two Chinese cities, Beijing and Shanghai. The top ten is completed by Los Angeles, Hong Kong, Singapore and Chicago.

Across the world there are scattered over 13 million millionaires and billionaires in 1940, evidenced by the census.