Home / World / 'London can withdraw Brexit decision on its own accord' 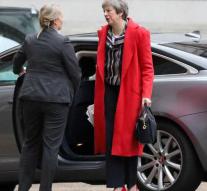 luxembourg - The United Kingdom may unilaterally withdraw the decision to leave the EU. If London were to want that, the other 27 countries would not have to give their approval separately.

An important adviser from the European Court of Justice, Advocate General Manuel Campos Sánchez-Bordona, said that Tuesday. Withdrawing a decision from an international treaty, according to him, is always allowed before the withdrawal is a fact. The court often follows such advice.