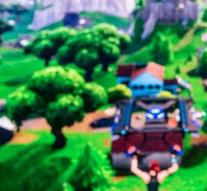 sydney - An Australian man who played the video game Fortnite was arrested because he would have mistreated his partner during a livestream. The 26-year-old gamer got into an argument with the woman when she asked him to stop playing and come to eat, the Australian broadcaster ABC.

On footage from the incident, gamer 'MrDeadMoth' films himself while he plays the popular game. As a result, the alleged domestic violence could also be followed live. When the man says he is eating 'this', he gets a box to his head. Then he runs away from the camera and according to ABC seems to be told how a blow is handed out.