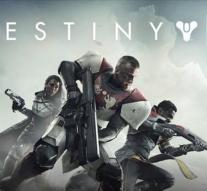 - Tonight it's so far: Destiny 2's first ever images. The sequel to the popular science fiction game will be released later this year, but today the game is first shown.

That happens during a special event in Hawthorne, Calif., But the images are also broadcast live. Look around at 19:00 (Dutch time) to reveal the long awaited sequel.

Destiny takes place in a universe where aliens have almost conquered the whole earth. Humanity is defended by Guardians, creatures with a special force called 'the light'. Players crawl into the skin of such Guardians.