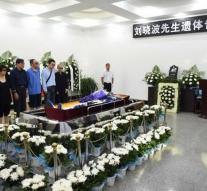 peking - The winners of the Nobel Prize for Peace Liu Xiaobo this week are cremated after a simple ceremony. That states Chinese state media.

At the cremation Saturday in northern China, friends and widows were present. The ashes were spread out by sea, according to friends, an attempt by the Chinese government to erase all traces on Liu Xiaobo's Chinese soil.

On photos released by the authorities, it can be seen that the widow Liu Xia and other family members around the chest are covered with white flowers. Liu Xiaobo died on liver cancer Thursday.

The 61-year-old former professor of literature was one of the driving forces behind Charta 08, a document signed by hundreds of Chinese and urging the communist government to reform. From all over the world, sadness has been responded to the death of the dissident. Liu was recently transferred from the prison to the hospital because of his illness.

France, the United States and the United Nations have called on China to dissuade the dissident, Liu Xia, to give her freedom of movement.