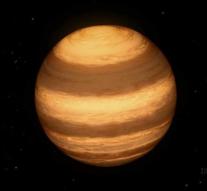 - It was already known that storms raging on planets, but now it turns out that stars can be affected by cyclones. On a small star in another galaxy rages a gigantic storm. That is three times the size of Earth.

US and Canadian scientists have discovered. They saw a spot on the dwarf star W1906 + 40. At first they thought it was a sunspot, as our sun has. But then they made two space telescopes to look at different ways to the star, she saw that it was a huge storm. It is not known how long that has been going, but on older images of the star, the researchers saw the same place.

The researchers compare the star with the planet Jupiter, which is about the same size. There has been raging for centuries, a massive storm, the Great Red Spot. Also, which is three times as large as the Earth.