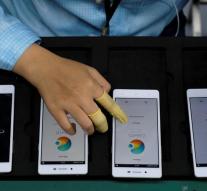 - Mobile operating systems iOS and Android are so dominant in the smartphone market there is virtually no room for a third player. That data comes from analyst firm Strategy Analytics. A whopping 99.7 percent of the market is occupied by Apple and Google.

Android is by far the most used worldwide with 87.5 percent of the market. IOS Apple should 'only' 12.1 percent do. The rise of Android is mainly due to the collapse of the market share of Windows 10 Mobile from Microsoft, the still decreasing number of BlackBerry devices in the market and stopping development of Mozilla's Firefox OS.

In the third quarter of 2016, according to the Bureau delivered 375.4 million smartphones, which is six percent more than the same period in 2015. A total of 328.6 million this feature Android, iOS 45.5 million (and its so iPhones), and there are still 1.3 million into the category 'other'.