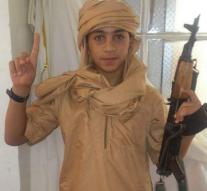 brussels - The little brother of terrorist Abdelhamid Abaaoud would go to Europe on their way to take revenge for the death of the organizers of the attacks in Paris.

It says at least one Belgian Syriëstrijder from the immediate vicinity of the killed terrorist, writes Het Laatste Nieuws. The man posted a message on Facebook with a picture of the 15-year-old Younes Abaaoud.

" My dear Abu Mansour ", so he asked the boy his name fighters. " Abu Omar al- Soussi (Abdelhamid Abaaoud) may be made ​​a martyr, his brother is still alive. And we are moving towards you, worshipers of the cross. "

According to the newspaper is not clear how credible is the man, but his photos and friends on Facebook can be seen that it is apparently close to the family. He also liaises with other extremists throughout Western Europe

Younes was early last year by his brother Abdel Hamid taken to Syria.