Home / World / Little boy (12) survives as the only plane crash 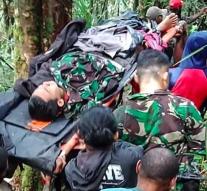 jakarta - In a crash with a single-engine airplane in the Indonesian province of Papua, eight people were killed. Only a 12-year-old boy survived the accident. The local authorities report this after the aircraft was found in mountainous areas.

The crashed aircraft is a Pilate Porter from Dimonim Air, who had seven passengers and two crew members on board. The aircraft was on its way in remote areas and disappeared from the radar just before landing in Oksibil.

After a search of a day, the wreck was found. At the debris, the relief workers found the 12-year-old boy Jumaidi next to the bodies. He was taken to a hospital in Oksibil for inspection.