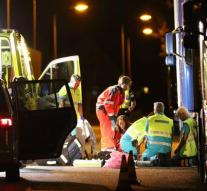 breda - A stabbing in Breda has taken on the night of Friday to Saturday a suspected 54-year-old man from Lithuania life. A 48-year-old Lithuanian has been arrested in connection with the stabbing. Also heard witnesses.

The man was stabbed in the Kruisvoort, at the IABC business. He was middle of the road between two trucks. When police arrived, he was still alive but was badly injured and unconscious. The victim was taken to hospital by ambulance, where he later died.