Home / Tech / Lithuania gets Minecraft in to convince Tesla 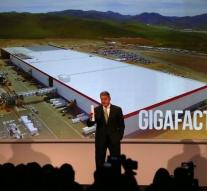 vilnius - Tesla wants to build a large factory in Europe and many countries want to 'Giga Factory' like within its borders. France has sent a minister to Tesla, the provinces of Groningen, Friesland and Drenthe started an Internet campaign. Lithuania took a different approach and already started the construction of the plant, but in Minecraft.

The Baltic country turned forty Minecrafters at work and two days later the factory was ready. According to a YouTube video where the official Twitter account of Tesla's Friday report made. '' Lithuania knows the way to our hearts, 'Tesla wrote in the link.

In the two and a half minute long video shows the accelerated construction of the plant. It is not only focus on the outside and the inside of the building, but also for the environment where Lithuania would like to put down the factory.

It is not yet clear when Tesla decided that the second Giga Factory to come. The company is still building the first Giga factory in the US state of Nevada. That factory is already partly operational.