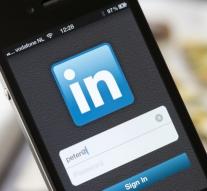 - Business networking site LinkedIn last quarter has been able to achieve significantly higher revenue. Like the previous quarter, the company benefits from the changes that have made ​​it, it turned out Thursday. However, it put a loss in the books, but less than anticipated.

LinkedIn organized in recent times include the sales and adjusted its advertising possibilities. Additionally continues to benefit from its acquisition of educational website Lynda, who previously for 1.5 billion dollars was incorporated.

In the third quarter revenue was at $ 779.6 million (710 million euros), 37 percent more than a year earlier and considerably more than the $ 756.4 million that analysts on average counted on. Bottom line there remained a loss of $ 40.5 million, compared with 4.3 million a year earlier. Analysts anticipated a loss of over 93 million dollars.

For the current quarter, LinkedIn provides a further increase in turnover of 845 to 850 million dollars. LinkedIn has 396 million users worldwide. There were still 380 million in the previous quarter.