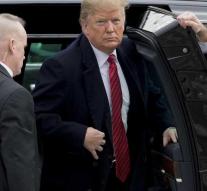 beauregard - US President Donald Trump has narrowly escaped a potentially serious traffic accident with the limousine he was being transported into.

On video footage of a local news channel in the state of Alabama shows how a driver loses control over the steering wheel, especially at the moment the parade cars with the presidential car in the other half of the road. The barrier between the two road halves prevents the driver and the limousine from colliding head-on.