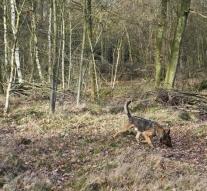 aken - Just across the border in Germany the body of a murdered man from the Netherlands was found. He was stabbed. The Public Prosecutor's Office in Aachen was unable to say who he was on Monday and when he was murdered, he was about twenty years old.

Hikers found the body on sunday when leaving their dog. First examination showed that he was stuck eight times in his chest and four times in his back. The body was in a forest near Schalbruch, just across the border at Susteren and Sittard.

The police in Limburg say that the man might have been murdered in the south of the province. It would be a taxi driver. His car was abandoned on Sunday on the A12 at Zevenhuizen in South Holland. Blood traces were in the car. A 45-year-old man was arrested near the taxi. Also in the Limburg Spaubeek, blood traces were found, on the street.