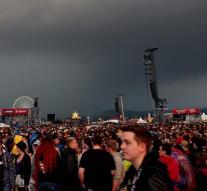 - The German festival Rock am Ring is Saturday still continuing. Friday became a lightning 51 people injured, of whom 15 seriously. Two people were resuscitated successfully. The festival was temporarily halted. For Saturday and Sunday re thunderstorms expected. On social media, photos and videos to see the storm yesterday.

Heavy rains led to countless broken tents on the muddy fields. A spokeswoman denied rumors that the three-day festival because of persistent bad weather would be canceled altogether.

The festival, with 90. 000 visitors, is held in Mendig, near Koblenz. Last year were at Rock am Ring 33 people injured by lightning.

The German weather services warn of severe thunderstorms in the west and far south of Germany. Bavaria and Baden-Wuerttemberg have to bear the brunt of the storm.

In the Netherlands Saturday code yellow issued for thunderstorms with heavy rainfall in the south and center of the country.