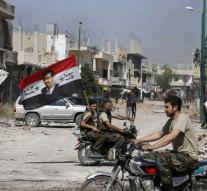 stockholm - Two Swedish men are Monday sentenced to life imprisonment for terrorist offenses in Syria in 2013. The two, 32 and 30 years, had assisted in executions, according to the Swedish court.

The Swedish police had in the house of one of them found a USB drive with videos of the murders. Then see his three masked men and three prisoners on their knees. Two of the prisoners, the throat cut and the other was beheaded. The three surrounding cheer.

The prosecutor said earlier in the process that the two Swedes have not used the knife. " But otherwise they were very involved. " The court considered it proven that the duo sympathized with a regime that strives for a caliphate. Both deny and appeal.