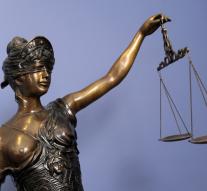 lecce - In Southern Italy Lecce on Thursday three men convicted of four murders, which were committed in the Netherlands in 2002.