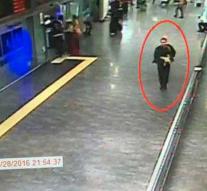 ankara - A Turkish court has convicted six persons of involvement in an attack in 2016 at Atatürk airport in Istanbul that claimed 45 lives. The state press agency Anadolu reported that all six convicts have been sentenced to life.

The attack at Atatürk airport in June 2016 was the work of three suicides. The responsibility for the attack was not claimed, but according to the Turkish authorities the terrorist action was the work of supporters of Islamic State.