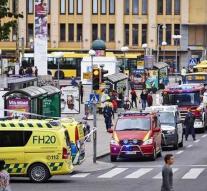 helsinki - A Moroccan man who stabbed two people in Finland and wounded eight was sentenced to life imprisonment. The then 22-year-old Abderrahman Bouanane stood out last year on a square in the city of Turku.

The stabbing is seen as the first terrorist attack in Finnish history. Agents finally shot the rejected asylum seeker in his leg. He later said he saw himself as a fighter for the Islamic State terror group, although that organization did not claim the attack.