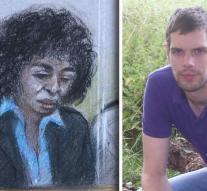 london - A woman in Great Britain was sentenced to life imprisonment for an acid attack on her former friend Mark van Dongen from Rijsbergen. Berlinah Wallace (48) is eligible for early release after twelve years, reports the BBC.

Wallace had a relationship with Van Dongen living in Bristol. In September 2015, the Rijsbergenaar went to the Wallace flat to put a point behind the relationship. He stayed asleep in the apartment. When he was in bed, Wallace Van Dongen would have showered with an acid. The man was very seriously injured. He later underwent euthanasia.

Wallace has been acquitted of murder and manslaughter. The court declared the woman guilty of throwing a corrosive liquid over the Rijsbergenaar.