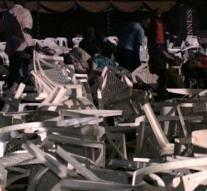 kampala - Five men were sentenced Friday by a court in Uganda to life imprisonment for the bloody bombings of soccer fans in Kampala in 2010, which killed 76 people. According among the convicts the mastermind behind the attack, which was claimed by terrorist group al-Shabaab.

Two others were sentenced to fifty years in prison. The terrorists detonated bombs on a soccer field and an Ethiopian restaurant, where hundreds of people on television screens to watch the match Spain-Netherlands watched.