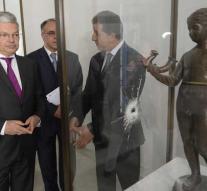 tunis - Seven terrorists were sentenced to life imprisonment on Saturday for their share in two attacks in Tunisia in 2015. During the attack on the Bardo museum in the capital Tunis in March, 21 people...

Other suspects received sentences from six months to sixteen years. A total of 51 people were accused of involvement in the attacks, which were claimed by the Islamic State (IS) terror group. It is estimated that approximately 3,000 Tunisians have joined IS or other terror groups in Iraq, Syria or Libya.

The attacks had major consequences for the local tourism industry as major European tour operators left Tunisia to the left.