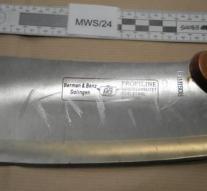 london - A London court has sentenced three men to life for a terrorist attack. The group is known as the 'Three Musketeers' because they communicated under that name.

According to the charge, they wanted to attack with knives. A fourth man, who joined them later, also got a lifetime. The three men are stuck for at least twenty years, the fourth minimum of fifteen years.

According to the court, the men were seized by a 'radical and violent ideology. 'Two of the men were stuck earlier because they had followed a militant training in Pakistan. Another was stuck because he had belongings that were linked to terror.