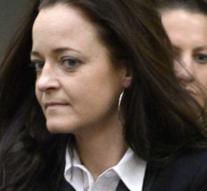 munich - A court in Munich, Germany, sentenced Beate Zschäpe, a member of the National Socialist Underground (NSU), to life imprisonment for ten murders. These were committed in the period 2000 and 2007. Victims were nine migrants and a policewoman.

The police did not track the underground, right-wing extremist cell until 2011 after two other members committed suicide. The trial against the 43-year-old Zschäpe and four suspects who are seen as helpers has lasted more than five years.

The racist killings took place all over Germany and the victims were eight Turks, a Greek and a policewoman. Because in many cases it concerned owners of eateries the series was initially called the Döner murders. The Public Prosecution, however, quickly spoke of terror when the scope of the case became clear.

The police tracked the NSU after a bank robbery in Eisenach. The two NSU members Uwe Mundlos and Uwe Böhnhardt were arrested shortly thereafter. They committed suicide, however. In the caravan they had with them, the police found an extensive arsenal of weapons, including the service weapon of the agent who had been shot dead in 2007.