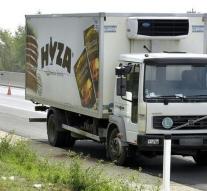 budapest - Against four members of an International gang of smugglers, a life sentence was imprisoned on Thursday for a Hungarian court. Seven other people involved in the smuggling heard lower sentences against themselves.

The suspects, from, among others, Hungary and Bulgaria, are held responsible for the death of 71 refugees found in Austria in 2015 in a truck abandoned by road. They were killed by choking.

According to the court, the four who had been claimed for life were directly involved in the transport of 71 refugees. According to the Hungarian prosecutor, the gang would have raised hundreds of thousands of euros by smuggling practices.