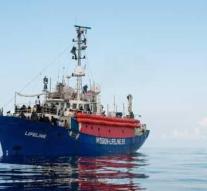 valletta - The controversial boat Lifeline of the German organization Mission-Lifeline walked into the port of Maltese Valletta on Wednesday. The crew had previously been allowed to dock in Malta on Wednesday. On arrival in Valletta, emergency services brought three babies and another person to the hospital directly.

The ship has been in the Mediterranean for six days in the hope of entering an Italian or Maltese port. On board are seventeen German crew members and about 230 migrants picked up off the coast of Libya, who have become largely seasick by the bad weather.

Several European countries have agreed to include migrants from the ship. The Netherlands will take over a maximum of twenty recognized refugees from Malta, in order to enable that country to accommodate the lifeline members of the Lifeline.