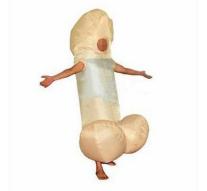 leeds - A remarkable search report in English Leeds Tuesday. The police are looking for a man who was dressed as a huge penis.

The man, along with a number of other men, is suspected of a gross abuse of a 26-year-old man. Among other things, a broken tibia and a dislocated knee occurred and had to be operated in the hospital.

The police assume that the men celebrated a bachelorette party in central Leeds and shared a picture of the suit online. Witnesses are asked to report.

'The suit might be funny for some, but we hope that showing it may cause people to remember things. This was a serious abuse that has long-term consequences for the victim, 'a police spokeswoman told the BBC.

The man in the suit was blank, about 1.83 tall and had a shaved head. He had a beige or white shirt. Another man in the group was a lot shorter and stronger and had black hair. He wore a red and white t-shirt.