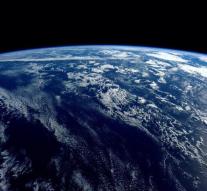 - The planet Kepler- 438B may look like the most on earth, but life there seems absolutely impossible. The atmosphere was blown away by the star that it is orbiting. Therefore, the planet is likely to be incessantly bombarded with harmful UV radiation, X-rays and charged particles. British scientists have calculated.

Kepler- 438B, which was discovered early this year, tops the so-called Earth Similarity Index. That means there is no planet found so far that looks more like the Earth. 438B is as large and as warm as the Earth. The difference is that his star is much more active than our sun. Star produces each year a pair of giant solar flares, which the planet is exposed. Each flame is at least ten times as strong as the strongest flame that our sun has ever produced. The solar flares at Kepler- 438B have 6.7 million times a million times as much energy as the atomic bomb on Hiroshima.

It is highly questionable whether an atmosphere of Kepler- 438B withstand such bombings, write the British. And without protective atmosphere is life impossible. The study is in the science journal Monthly Notices of the Royal Astronomical Society.