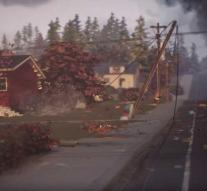 - Are you biting off when someone insults you wrongly? Are you going strong in the defense, are you getting out or are you just walking away? Not only in daily life we ​​make continuous choices, also in the Life Strange games from developer Dontnod his pressing questions with ditto answers is extremely important.

In part 2 a new path is followed, one that intrigues to the bone. Although the characters from part one are missed a little bit.

Life is Strange 2 is a new part in the Life is Strange series by Dontnod Entertainment, where a compelling story is always brought to life. In stages. Where a TV series like Game of Thrones leans on the success of each time delivering a cliffhanger, that happens with the Life is Strange series too. Because before a complete game is deposited in the stores (such as a seasonal box from Game of Thrones), several separate episodes are delivered first. Something that developer Telltale Games did not do well in the beginning and that Dontnod looked good of.

In 2015 gamers got to know Max: a teenage girl from Arcadia Bay with certain powers. She was the lead actress in Life is Strange. With a photo camera in hand, she discovers her school and surroundings and everything in the neighborhood. Which is useful, because one classmate, Rachel, is missing from one moment to the next. Together with a friend, Choe, the two experience a lot of adventures. In 2017 Life is Strange: Before the Storm: a game in which not Max plays the leading role, but Chloe and Rachel. The game was a forerunner of Life is Stange (part 1).