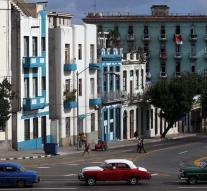 havana - Cuba has begun nine days of mourning after the death of Fidel Castro. The unto death beloved and hated Cuban leader died Friday at the age of 90. Public life in Cuba is going through, but slightly more subdued than usual. On the street, no additional police presence.

The sale of alcohol is broken and concerts and other performances were canceled. The baseball, politics after the second passion of Fidel, is silent. However, there are Late in capital Havana planned massive mourning gatherings. Also in the eastern city of Santiago will be stopped by the death of Fidel.

At the University of Havana, hundreds of students came together. 'Viva Fidel, Viva Raul,' she sang about their hero and his successor.