Home / World / Liege-gunner was still a psychiatrist on Monday 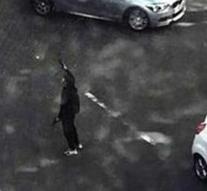 liege - The father of Benjamin Herman, who killed three people in Liège and committed a murder before, can not believe the actions of his son. On Monday he took Herman jr. Out of prison, after which 'no dirt seemed to be in the air'.

'On Monday I went to get him in prison. After I picked him up, I took him to the psychiatrist in Namur ', the father tells Sudpresse.

Nothing seemed like Herman would come to his horrors one day later. 'He spent time here with the children in the garden, he played with them and he even went to get ice cream. '

The father could not believe the news about his son at first. 'I do not have a television, but people started talking soon. 'When the police were at his door, he knew that it was serious. He did not get many details. 'I then ran into the police car. '

Herman, like his brother, was notorious in his hometown Rochefort. 'They were two fools, dangerous madmen,' one local resident tells at Avenir. Another states that they 'both have problems with drugs and violence' throughout their lives.

His cousin is also not very compliment. 'Benjamin was often in the juvenile prison, up and down. And then in the ordinary prison. '